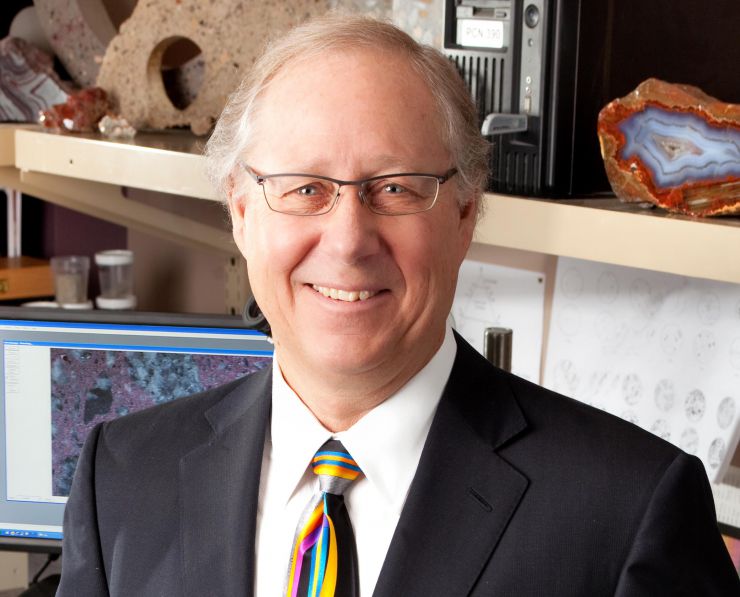 Richard D. Stehly, PE, one of the founders of American Engineering Testing, Inc. (AET) and American Petrographic Services, Inc. (APS), passed away suddenly on Saturday evening September 18, 2010. Some individuals are just meant to leave their mark on an industry, a profession or our society, for that matter and Dick did just that. The reaction to Dick’s unexpected passing has gone beyond local attention, garnering both national and international responses. Why such attention to a concrete, materials and forensic engineer from Minnesota?

“Dick Stehly was one of the most respected individuals in the consulting engineering community. He will be especially remembered for the insight he provided to local and national media after the I-35 bridge collapse,” said David Oxley, Executive Director for the American Council of Engineering Companies of MN. “His depth of knowledge and clear explanations of engineering design helped the public better understand what may have contributed to this tragedy.” Today each of us tends to take our structures and infrastructure for granted. After all, these marvels are designed, engineered and constructed by professionals. If you think back, construction projects used to shut down for the winter months. Not so today, as time is money, especially during economic uncertainty. Engineering, materials design and construction techniques have progressed over the years through a series of scientific and tested improvements, culminating in today’s construction practices. Each of us in the metro area saw the results of incremental change to our industry in the form of the new I-35W Bridge, which was constructed in 11 months during one of Minnesota’s coldest winters. When the collapse occurred, the media immediately placed Dick on live television to explain complicated engineering issues to the general public and he provided clear, concise and accurate insight.

Dick started his career at Twin City Testing (TCT) as a material intern in 1971. Dick was a young, energetic, brash and technically capable young engineer who wanted nothing more than to work at the most technically capable and research oriented firm in the Midwest. He quickly acquired the Chief Concrete Engineer (Richard McNamara, P.E.), the President, Mr. Norman Henning, P.E., and Lowery Smith of Sheily Concrete as his mentors in the field of concrete design, batching, forensics and diagnostic analysis of failure. Under their guidance, Dick honed his research, investigative and presentation skills to define and improve the properties of one of our more time tested materials, concrete.

In 1974, Dick led the research for the use of fly ash (a waste product of coal fired energy plants) as an additive in concrete. The multiple year study provided irrefutable documentation that use of this waste material improved the strength and durability properties of concrete. Dick and his associates have followed and analyzed the results of fly ash as an additive to concrete for the last 35 years. And yes, Dick Stehly ascended to Presidency of TCT after 18 years in 1987.

“Dick Stehly served many contractors and material suppliers in the masonry and concrete industry over the years, each with the same exceptional level of professionalism, kindness, and respect,” said Olene Bigelow, former executive director for the International Masonry Institute. “His dedication to personal service, no matter how large or small the client, was to be admired. As a member of the local sponsorship committee for the upcoming 11th North American Masonry Conference, he approached the task with his characteristic energy and enthusiasm. We will miss his wisdom, insight and leadership, as well as his friendship.”

Mr. Stehly was actively involved in the American Concrete Institute (ACI) for over 30 years. As an ACI representative, he traveled to over 25 countries including Argentina, Columbia, Denmark, Egypt, Ecuador, France, Germany, India, Israel, Italy, Jordan, Kuwait, Norway, Peru, Poland, Saudi Arabia and the United Arab Emirates. His travels not only enhanced ACI’s international image, but also shed a positive light on his own firm. Similar to his business life, his enthusiasm, capability and research orientation allowed him to serve in many capacities, including his current year as ACI President.

It is said that life often comes around full circle, and that is definitely the case for Dick. In July of this year, he testified on behalf of ACI in Washington DC on the continued use of fly ash as an admixture in concrete. His work in the 70’s was the forerunner of the concept of “sustainability,” which is so prevalent today. Basically, sustainability is assuring that reserves of material are preserved for future generations. Using fly ash, a combustion byproduct, as an admixture also reduces the amount of waste material we put in landfills and holding ponds.

“The untimely passing of my friend and colleague Richard Stehly is a tremendous loss for the concrete industry and for anyone who had the privilege of knowing him and working with him,” said Ron Burg, ACI Executive Vice President. “His enthusiasm for the American Concrete Institute and the concrete industry was infectious, and our membership, staff, and the entire concrete industry will feel his loss, both personally and professionally.”

“Dick was a tireless champion of concrete’s role in building a sustainable future by incorporating pozzolanic materials such as flyash, and by providing durable concrete for long-term performance of structures,” said Kevin MacDonald, Ph.D., P.E., FACI, Vice President of Engineering Services for Cemstone and Past President of the Minnesota Concrete Council. “He was a key individual on the editorial review panel for ‘the Sustainable Concrete Guide’ published by the U.S. Green Concrete Council. It was my pleasure to work alongside him on these and many other projects at ACI. As a friend, a fellow practitioner and a colleague I can say that we are truly ten times less by one today.”

Some of Mr. Stehly’s major accomplishments included being project manager for the Metrodome as well as the new Minnesota Twins Ballpark. He contributed to the rebuilding of the Pentagon and was there to personally rededicate the new structure. According to Steve Maki of the Metropolitan Sports Commission, “Dick’s expertise and hard work were vital to the construction of the Metrodome. His knowledge and experience was invaluable to the project.”

“We all know that Dick was a smart guy. What doesn’t become readily apparent on his resume was his genuine warmth or his instant likability,” said Ed Hunter, project manager for the MN Ballpark Authority. “My regard for Dick Stehly puts him at the very, very top of the list. I am pleased to have known him, and to have worked with him, and I will miss him.”

In 1992, Dick was the lead technical research consultant on the successful forensic diagnosis of pavement joint distress and coined the term “Deicer Distress.” This research investigation won the Consulting Engineers Council Grand Award, for the Minnesota and Wisconsin Departments of Transportation. In 1997, Dick co-authored a book with Scott Wolter, Ettringite: Cancer of Concrete, which included the Deicer Distress research.

Dick was the lead forensic concrete engineer for petrographic analysis testing of the fire/heat damaged structural concrete for the Pentagon after 9-11, the “Phoenix Project.” That analysis played a major role in the reconstruction of the Pentagon that was finished weeks ahead of schedule.